The Sister is first discovered by the Akudama inside the vault on the Shinkansen, along with her Brother.

She is revealed to be half of the gift meant to be brought to Kantō. The Akudama are to bring her to a secret location called "001003" underneath Expo Park.

A mysterious girl. She is quiet, with little self-assertion. She tends to hide behind her brother.[2]

Sister has the appearance of a little girl with black hair and red eyes. She wears a white kimono with a dark red hakama over it and brown boots. Her hair is styled with "hime-style" bangs in the front and two braids on the back. She also wears a red hair band.

Sister possesses a flute which, when she plays it, generates a "force field", or invisible barrier the shape of a ball around her, capable of stopping the Shinkansen and protecting those inside from anything outside it, including the contaminated air from the Absolute Quarantine Zone.

She is also the first one to showcase her and her brother's lunchbox, which has the ability to reconfigure atoms in the air and water to generate any meal the person holding it asks for by voice command.

In Episode 6, it is revealed that like her Brother, she has the ability to regenerate through unknown means. As such, she is described to be immortal.

When Sister first meets him, Brother immediately claims to be her brother, and that as her sibling, he will protect her no matter what. Although expressionless as always, Sister appears to be moved by his words and accepts him as her brother.

She often hides behind him, and she trusts him entirely. When she is separated from him, after he forces her inside the launching rocket with the Swindler, she asks to see him again, and often cries, missing him. She appears to be scared without him, and to feel abandoned, as she insists that he said he'd always be there to protect her.

Sister is particularly moved by the Swindler's kind actions and words towards her and her brother, and is only ever seen blushing because of her. She is at first hesitant to consider her a new "sister" but, when she insists, appears to be moved by her words once again, trusting her to protect her for as long as she's separated from her brother.

Sister tries to imitate the Swindler at times, and pays close attention to the things she claims are fun, or people usually do.

Official transparent illustration of the Sister 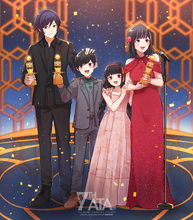 Anime of the Year Winner Illustration by Hakamii featuring the Courier, Brother, Sister and the Swindler 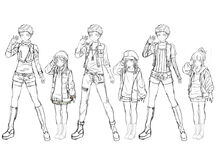