Before his involvement with Spike, Komatsuzaki was a sculpture graduate. He became the character designer for Danganronpa's first title Danganronpa: Trigger Happy Havoc, his first experience as such.[1]

In 2015 he participated, along with many other artists, in the mobile game Fate/Grand Order as a character designer and the artist for two characters, Edmond Dantès and Cleopatra.

After the completion of the last Danganronpa game Danganronpa V3: Killing Harmony and the Danganronpa spin-off anime series Danganronpa 3: The End of Hope's Peak High School, Kazutaka Kodaka approached Komatsuzaki to discuss his plans to create his own independent development company. Along with other industry veterans and fellow Spike Chunsoft employees, the group founded the studio Too Kyo Games in 2017 and officially left Spike Chunsoft.

In 2020, Komatsuzaki is credited as the character designer behind the anime Akudama Drive. He is also participating in the development of Too Kyo Games' future title TRIBE NINE in collaboration with studio Akatsuki. 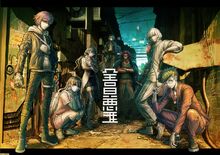 Promotional artwork of the Courier and the Cutthroat 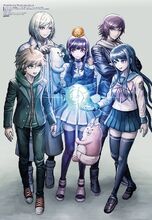 Promotional artwork of Brother and Sister

Bonus illustration for purchasers of all 6 first edition volumes of Akudama Drive featuring all 6 Akudama, the Brother, Sister, Apprentice, Master and Black Cat